Shortly after waking up, Rose brought her food bag and mine up from the bear hang. Super nice of her to let me hijack her bear hang. Equally convenient and thoughtful for her to bring it to me this morning, too. Thanks, Rose! Deciding to go small for breakfast, I ate a breakfast bar and called it good. However, I decided to make a round of pour-over coffee. Good stuff. A perfect way to start my final day on this year’s section hike leading up to Fontana Dam, where I would soon have my first encounter with a charging cord monster.

Breakfast is in the Bag

Kass and Joe had breakfast with me and we enjoyed more good food and company. Annalise and Indy slept in so long that I almost didn’t get a chance to say goodbye. I had already decided to hike with Kass and Joe to Fontana and we were about to leave before I noticed they had crawled out of their tent. Last night, I told Annalise that I had some extra food and she mentioned wanting it so I broke out my food bag quickly and gave it to her before leaving. She looked as if she was going to cry. “I was out of food. Like, I had nothing to eat for breakfast,” she said. I replied, “Glad I can help. Now you do!” I walked away grateful that I had taken the time to stop and make good on my offer instead of rushing out.

Joe, Kass, and I headed out for the morning climb. I was glad to let them lead because their pace was slower than mine. Besides, I had the distinct feeling I would have exhausted myself and blown out the miles today, only to be disappointed the day was over so quickly.

There was no stop for an official lunch today because of the low seven-mile day. We stopped a few times for snacks and water. In fact, Joe saved me a stop for water and spotted me a liter so I wouldn’t have to take time to filter. I didn’t have to fetch my food bag this morning and now I don’t have to get water and filter it? I’m practically feeling spoiled at this point.

As we hiked on, we stepped down some rocks, climbed back up and realized the AT went both ways. We had missed a small section of trail! Kass is a purist, so she went back looking for where we turned off. We only missed about 30-50 feet of trail maneuvering on the rocks, but since we missed it, she went back to climb the official trail rocks. As she was maneuvering back, she fell flat on her butt! She sat there shocked and we all laughed it off. You know what they say: “No good deed goes unpunished.” We let her take the lead and continue to set the pace.

A little later, I was following Joe and he suddenly jumped sideways. Joe was laughing as he shouted, “Kass, you just blew by a snake!” We aren’t sure what kind of snake it was, but it was chilling right on the edge of the trail. The snake didn’t seem to care. Less than two minutes later we met a SOBO named Mary and decided to warn her about the snake, just in case. 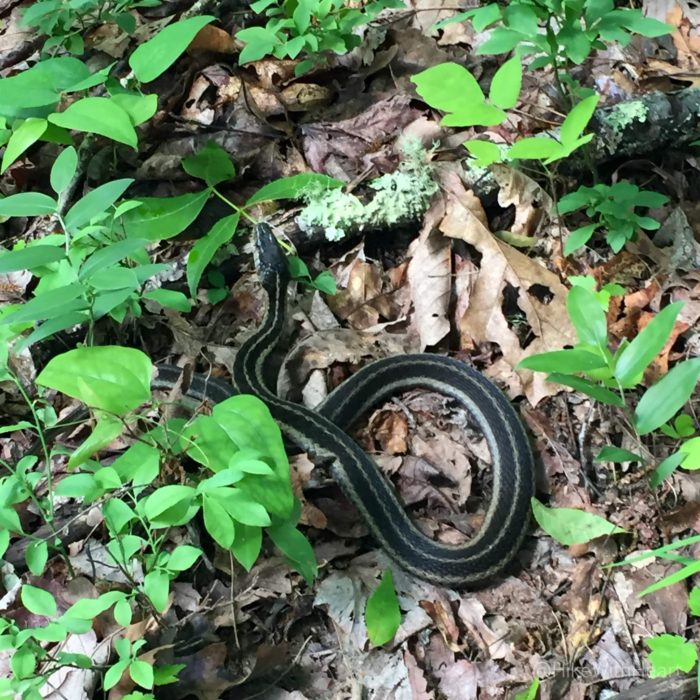 We also ran into the couple slackpacking from their RV. It’s the couple with the Indonesian trail names meaning “mom” and “dad” that I can’t remember how to pronounce. Oops, ha ha.

In what felt like no time, we abruptly popped out of the woods onto Fontana Dam road about a mile from the shelter. Joe saw a hat hanging there and checked it for a name. “I almost bought one identical to this earlier this week,” he said. “No name?” I asked. Nope! Joe kept the hat, chalking it up to fate and threw out a quick, “Leave no trace, right?” I find it funny that this is the second abandoned hat we’ve removed from the trail in just a few days. After crossing the street, I decided to finish this section at my own pace and took the lead. As expected, I shortly lost sight of them, confirming my theory of how the day would have gone without letting them set the pace.

Knowing it was the last mile brought the wave of emotions. I wanted to finish strong, but I didn’t want it to be over. Hiking by myself allowed me to sneak in a little extra prayer time while walking and sort out some stuff that was weighing on my mind. Just like last year, a feeling of sadness and maybe even heartbreak set in as I knew that my time on the trail would soon be over for this year. There’s no dread to go back to work or disappointment in returning to my family; there is just a void that comes from parting with the trail and the simple life and experiences it provides. It’s honestly pretty hard to explain and some people will understand, while some people will think it sounds crazy

Nearing the shelter, I heard a noise off trail that sounded bigger than a bird or a squirrel. I stopped and found the noise just quick enough to see a fox stop and look my way. What a beautiful creature with its long, bushy tail. I watched it trot up the mountain with light-footed ease. This fox was the welcome break my mind needed to snap out of all my internal thoughts and live in the moment for the last few switch backs. I took in the smells, listened to the lake water lap at the shore, and felt the well-worn path beneath my feet. 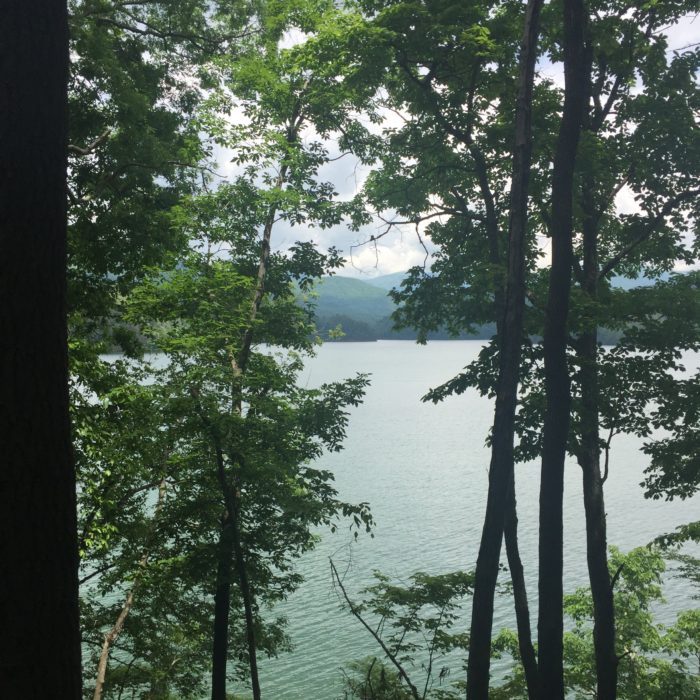 Moments turned into memories as I walked out of the woods, climbed a grassy hill and found the Fontana Hilton – one of the nicest shelters on the entire AT. Rose arrived at the shelter earlier and watched me collapse nearby for a rest. Soon enough, Joe and Kass rolled in and we all took care of some post-hike needs: feet, water, bathroom breaks, etc. After all, we are at the Fontana Hilton. There are flush toilets, a shower, plenty of room inside the shelter, and even a solar charging station outside. The charging station was a little spotty, but it didn’t matter much as we soon decided food was in order. Since my car was parked at the Fontana Dam parking lot, I did what any other hiker trash would do: loaded my car with smelly hikers and drove to Fontana Village to eat! 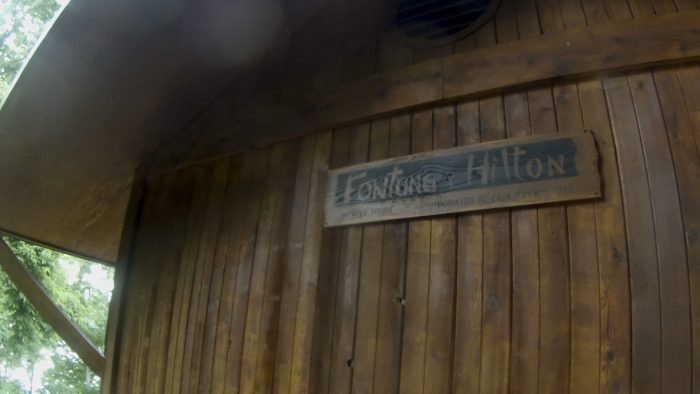 We arrived and found a place to sit on the patio just as it started to rain – perfect timing. Annalise and Indy were already on the porch so we assumed they made excellent time hiking here directly from the road crossing. We invited them over, sat together, and ate as a group once more. We took maximum advantage of the power outlets on the porch and created a charging cord monster of sorts. I see hikers post photos of these monstrosities all the time but it was my first experience with one in the wild.

Annalise left ahead of us to catch her shuttle so she can skip ahead of the Smokies with her dog, Indy. The others needed to resupply so we stopped by the general store. The store had a logbook we all took turns signing before discovering the ice cream shop. None of us could resist indulging. My drug of choice: a root beer float.

After ice cream, we drove back to the parking lot near the shelter. Kass and Joe prepped their food, said goodbye, and starting walking toward the Smoky Mountains to make a few more miles for the day. I went out on the dam to take some photos and see them off. The scale of this place is pretty epic. The huge dam, giant lake and enormous amount of water flowing through it are powerful sights to behold.

I walked back to the shelter wondering if more hikers might have arrived while I was gone. Understatement of the hike! A large Boy Scout troop, Troop 61 out of Florida, had shown up. Nice enough group. A few other hikers I hadn’t met before also arrived, including Ace and her hiking partner (didn’t catch her name,) who I had met at NOC.  These two were the lucky ones who happened to be nearby and get my leftover chicken fingers at NOC, ha ha.

I also met a southbound hiker who did most of her AT hike last year. She described the differences between hiking off-season southbound versus hiking with the bubble like she did last year. She described some dramatic differences in the social dynamic of hiking the AT. Sounds like she really enjoys hiking with people rather than hiking alone. I can sympathize with that.

I set up my sleep gear in the shelter before it completely filled up. I wasn’t expecting to have that problem in this huge shelter. With light to spare, I sipped on the tea I brought from the restaurant and continued to socialize with the other hikers.

While I was chatting with Rose, I looked up and saw an unexpected sight: Joe and Kass! They told us about arriving at the trailhead on the other side of the dam and reading about the closures for camps and shelters. Apparently it would have made for some very long mileage and they weren’t up for that tonight. Understandable, especially since most of the closures were due to bear activity. We welcomed them back into the fold for the night and continued to socialize while the sun began to set.

As evening settled, fireflies illuminated the air. At first it was just one or two, but before long they were everywhere. What a perfect way to spend my last night on trail. I adore fireflies! About that time, Joe and Kass called it a night so they could get an early start for their long-mileage day tomorrow.

Rose and I considered calling it a night as well, but got distracted by the poor attempt the Boy Scouts were making at starting a fire. Although they did seem to get one going for a minute, the group effort smothered it soon after. Along with the fire, my will to stay awake had gone out and I went to bed. I doubt the scouts got that fire going again because they all came to the shelter soon after I did.

At some point, Rose must have been fed up with the Boy Scouts because I woke up and noticed she was gone. In the morning, I found her tent set up next to the shelter under the roof awning. I am either too lazy for that or wasn’t nearly as bothered. As a bonus, I had gotten up so early (to use the restroom, of course –why can’t my body just let me sleep?) that I was able to say “bye” to Kass and Joe for the last time. Good luck, guys! I’m looking forward to hiking the Great Smoky Mountains next year! 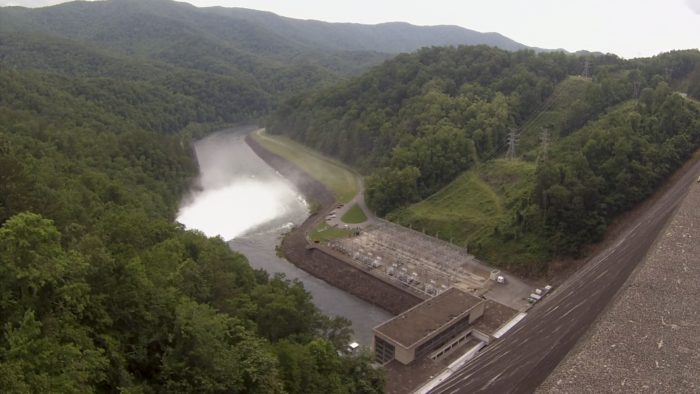