It’s my 9th day on the Appalachian Trail and last night’s storm is over. For now. Today’s breakfast is one my favorites: Biscuits and gravy. Dad and I were both supposed to enjoy them but Dad took one bite and was nauseous. Bummer. This is one of my top two favorite breakfast meals if I’m not eating a bar on-the-go or making a quick oatmeal, so I was surprised at the reaction. Dad ended up snacking through the morning trying to make up for skipping breakfast. We packed up and headed out just after 8:15 a.m. Today, Albert Mountain will be the highlight. I just hope the rain doesn’t ruin the views.

Most of the morning was a gradual climb. Climbs seem to be Dad’s slowest pursuit out here so it was slow going. I’m kind of surprised because I know the downhills are hard on knees, which I anticipated would be his worst enemy. It seems like the opposite for now. We enjoyed some views through the trees still recovering from last year’s fires and enjoyed the interesting variety of dead wood and new growth. It wasn’t too long before we happened upon the Appalachian Trail Conservancy’s Konnarock Trail Crew, which was out trying to re-enforce a section of trail to make sure the current footpath wouldn’t wash away by adding barriers and stone to the footpath we were about to traverse. After thanking each one as we came across them (seriously, thanks to all the trail maintainers!), we continued on to enjoy more of the beautiful but wet trail. 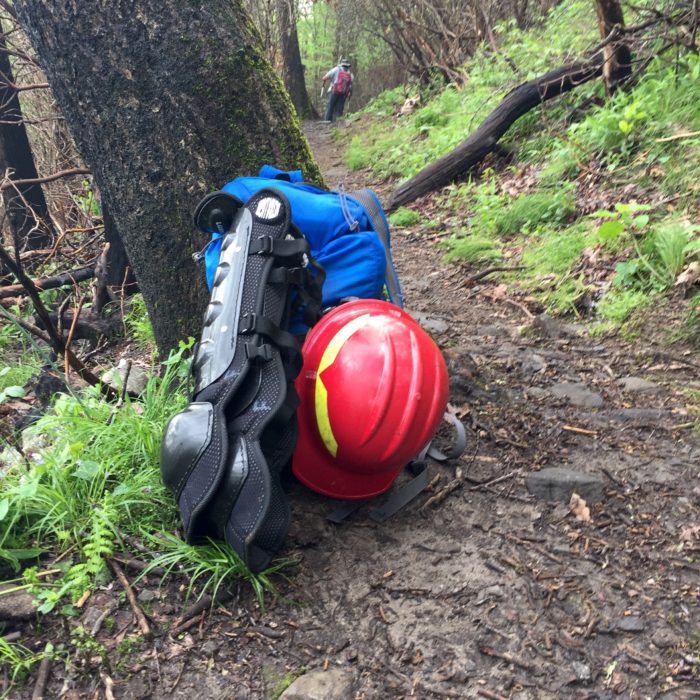 The Paths Are Paved with Glitter

We took a break later in the morning, and while I had my pack off I noticed there were several shiny rocks around. I found some some naturally occurring mica of some kind and snapped the photo below. Along with my own interest in the little details like this that make the trail interesting, I’m sure my son David will get a kick out of it. He’s at the perfect age where shiny rocks thrill him and he wants to pick up every shiny rock and take the “crystal” home. I leave the mica on the trail, but capture the memory for us both. The trail in this area continued to put on a show and  sparkled like glitter when the sun decided to peek through the clouds. No one ever mentioned the road to Albert Mountain was paved with glitter. 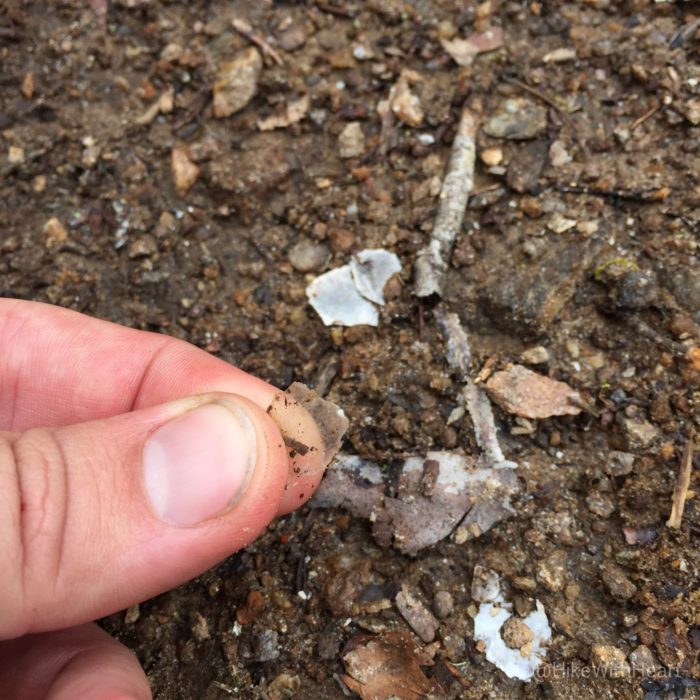 Passing Betty Creek Gap, we make our final uphill approach to Albert Mountain. Technically, we pass Mooney Gap and a couple of other small dips, but nothing significant. It’s mostly up. Trust me, my legs are quite sure this is still uphill. About a mile before the climb up Albert Mountain we find a nice view and once again the white clouds have risen enough for us to enjoy it. The view didn’t come with a place to sit for lunch, so we found a spot just up ahead in a nice shaded area and sat down to eat. Dad was still finding it difficult to eat, but I was eating better than I usually do on the first day or two of a hiking trip. I ended up eating all the snacks I packed today, actually. That’s a first for me. 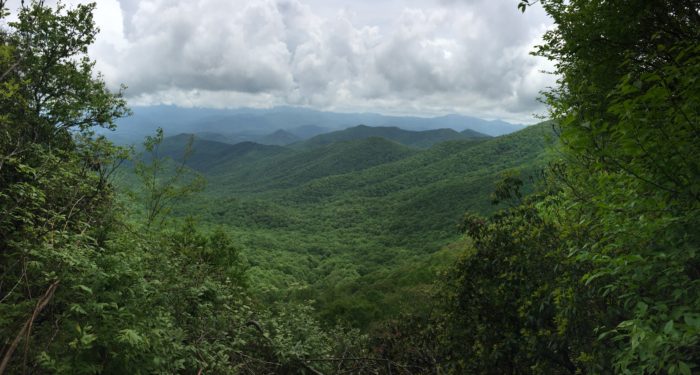 After lunch, we finished the last mile before the steep climb up Albert Mountain. About a 400-foot climb in 0.3 miles, this would be one of the most difficult climbs of the trip considering we have climbed several times this morning already, including the 600 feet in the last couple miles leading up to this point. Before making the climb, I realized we didn’t really have much water to get us through the climb and the few miles after that. Probably should have filled up already, but I got lazy. I decided to take a side trail across the forest road before we go up Albert Mountain and look for water. Well, I found it. Not before a 0.2 mile steep downhill and having to go 50 feet off trail to get it. I’m not even sure if that trail actually gets down to the water I could hear, but I was done zigzagging toward and away from water I could clearly hear a little way off trail. I guess my first clue should have been the “More Difficult” sign at the head of this side trail. Guess what? They were right and this is a very sketchy side trail complete with sizable downage (a large tree or two), overgrowth, and a steep incline. I don’t recommend it. Since we were about to climb Albert and the side trail was sketchy, I only filtered one liter for each of us; just enough.

Next Stop: the Summit of Albert Mountain

I see you, Albert Mountain. I can’t wait to hit that 100-mile mark!

The climb ended up being all it was advertised to be and more. I’ve always heard the climb was steep, but no one told me it would be near hand-over-hand climbing. It would have been hand-over-hand if I didn’t have trekking poles. It was challenging for me and I was worried about Dad. There were some steep “steps” that wouldn’t be easy for anyone with knee issues. I stayed ahead of him, but within eyesight. A person could easily get hurt on this slick rock climb (don’t forget it’s been raining all morning).

After the challenging 0.3 mile climb came the sweet rewards: finishing my first 100 miles on a major trail and the panoramic view I was afraid I wouldn’t get to see. Well guess, what? The clouds were once again lifting and we got great views! 180 degree views on the fire tower and I even had cell service so I got to video call my family and share it with them. I have to admit I had been fantasizing about hitting this 100-mile mark for a while and I’m stoked that my expectations didn’t get wrecked by the weather. 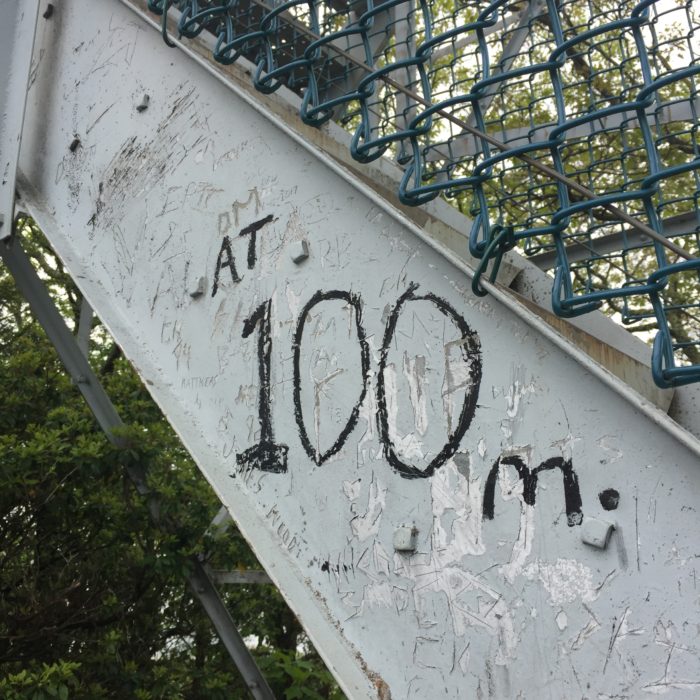 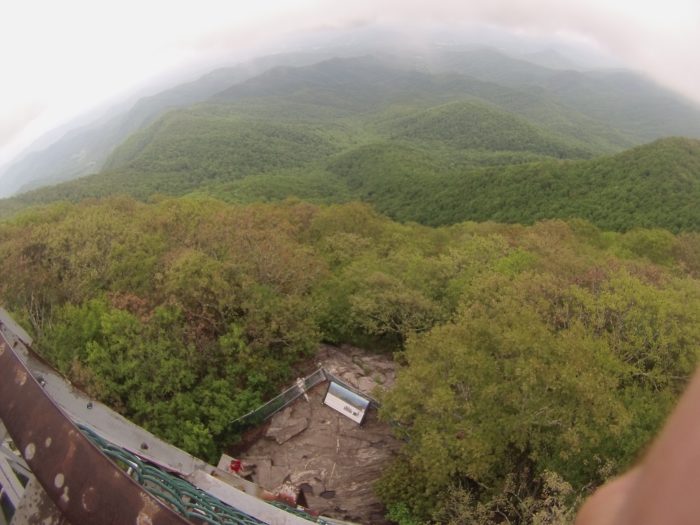 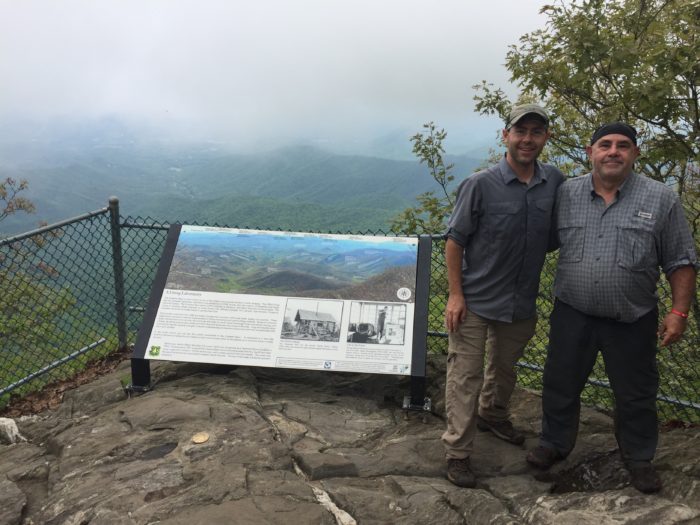 After Albert Mountain it was all downhill for the day. Although Dad does better in general on the downhills, I could tell Albert had given him a confidence boost and a spring in his step. He practically bounced down the trail for the next couple of miles. After a while, the downhill became difficult but it sure seemed worth the effort with all the luck we were getting with the weather. We found a small but interesting double waterfall on the descent and made good time on the downhill. Even with slowing down in the late afternoon, we managed to make it to Rock Gap Shelter at 7:15 p.m. with enough time and daylight to eat and set up our sleep systems in the shelter.

Overall today, I offered Dad more assistance and he seemed happy to accept. Little things like filling his water filter bag and hanging the bear bags at the end of the day. He still seemed to be having a hard time eating so I hoped he would rest well and recover from the long day. We did 12.1 miles, the longest day we had planned leading up to Fontana Dam. Once again, I enjoyed not having to set up my tent and having the shelter all to ourselves. Tonight, however, the rain wasn’t the noise that would wake me. There is some material (like part of a tent or a poncho) shoved into part of the shelter wall and I’m guessing a mouse has made a nest in there because I could hear it making noise and chewing or crunching up there. It was honestly more annoying than the rain on the shelter roof or the thunder. Thankfully, none of the mice have decided to dance on my face yet. 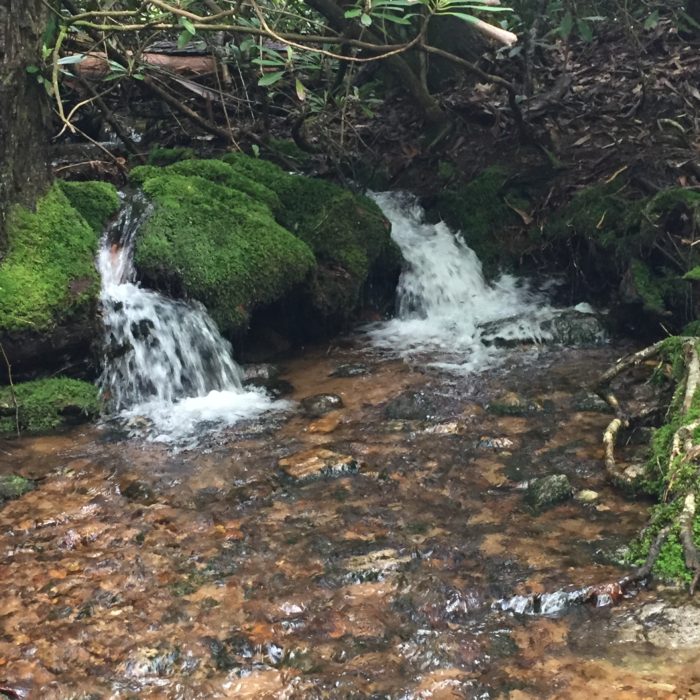